Two more synthetic grass pitches and a multipurpose one have been realized, which constitute the first lot for the creation of a unique sports complex for equipment along the Tyrrhenian coast. 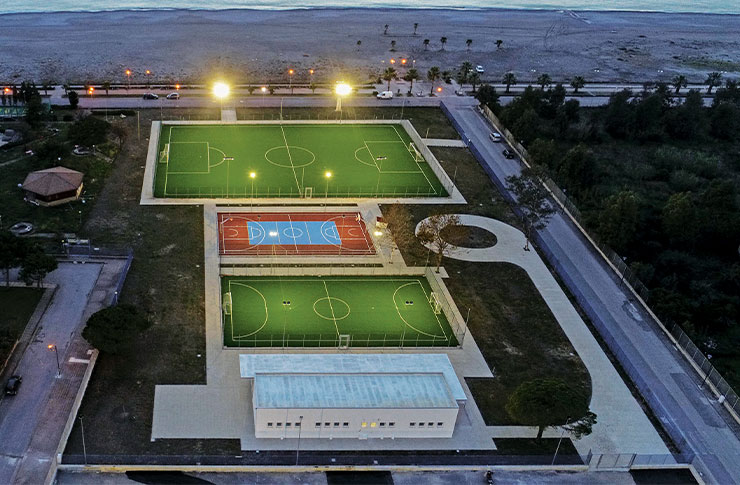 With the financial facilities of the Istituto per il Credito Sportivo, together with the adaptation of the Mario Tedesco Stadium, two more synthetic grass pitches and a multipurpose one have been realized, which constitute the first lot for the creation of a unique sports complex for equipment along the Tyrrhenian coast of Calabria.

The old eleven-a-side pitch has been adapted to LND standards for facilities for amateur competitions. The LigaTurf RS+ CoolPlus WorldCup Edition system, produced by Polytan, has been adopted for the realization of the surface turf.
The heart of the system is the elastic layer made on site. It consists of elastic rubber granules and a PU binder. The ‘in situ’ construction allows the unevenness of the ground on which the lawn is laid to be evened out. When an elastic layer is installed in situ, the polyurethane binder has the task of ensuring its permanent elasticity and durability.

The granulate of the elastic infill is made of SBR rubber, recycled and coated with special polyurethane paints that form the encapsulation of the granule giving the chosen color green or brown and at the same time totally eliminates the smell typical of rubber.
In relation to a significant demand from users of soccer facilities, the sports center was equipped with an eight-player soccer field and a five-a-side soccer field. Soccer on 8 or 5-a-side pitches is characterized, unlike 11-a-side soccer, by a mode of play based on high rhythms with rather fast ball transfers; therefore, in order to ensure the maximum effectiveness of the playing field, a synthetic turf type Ligagrass Pro 238 13/8 Coolplus was chosen, characterized by a curly textured monofilament. In addition to the stabilizing infill in sand with controlled grain size, a performance infill in green or brown RPU rubber granules is provided here.

Finally, the basketball and volleyball court is intended to fill a further need of the territory to expand and diversify the offer. The surface is made of a special cold resin prepared and processed on site. The markings of the court are of two different colors to identify the different types of game.