An innovative solution to cover padel fields, increasingly popular and in demand also in Italy. 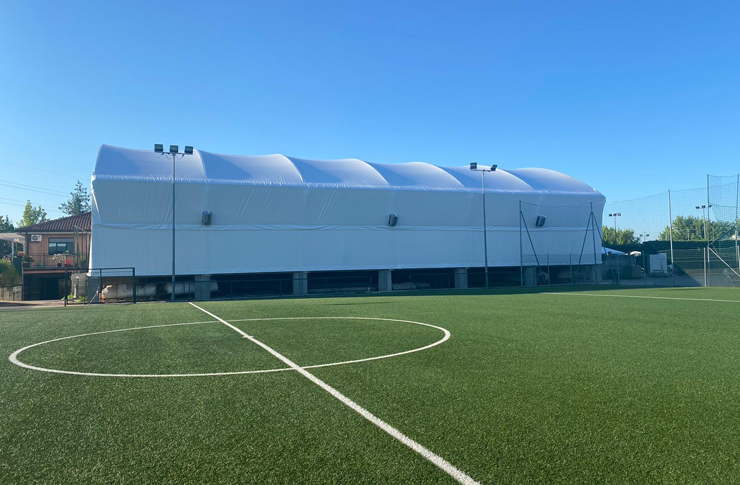 In the face of the increasing diffusion of the sport of padel, and the growing needs of athletes and facility managers, looking at the aesthetic characteristics and management costs of the roofs adopted to date, FT s.r.l. Plasteco Milano has looked for a solution that is standard, harmonious with the context and has a low cost.

In this way a new shape was born that until today had never been seen before in padel coverings. First of all, the color of the arches was chosen to give a greater brightness to the structure, making it brighter to the eye and relaxing for players and public.

Added to this are the side closures, which can also be glazed to further increase lightness and brightness, and can be made in double membrane to increase the energy efficiency of the room.

The attention to detail means that the track has also been designed to be stumbling-proof.

On the arches there is the possibility to install the heating system, in order to exploit the structure also in winter.

The motor of the heating machine is fixed outside not affecting the aesthetics of the same while the fan part is inserted between the fields so as not to bother the players. It has an efficiency up to 109%, Energy Efficiency Class A and Class Nox 6.

The choice of the skylight will help in energy efficiency by limiting the use of artificial light and making the most of natural light. In fact, the translucent band allows a postponement of the lighting of LED projectors at sunset – a solution that Plasteco has been applying since 1966!

The roofing membranes, including the sky band, can be made according to the type chosen, in single sheet, double sheet, triple sheet and even quadruple sheet (now mandatory in Switzerland since some years). The material used for the realization of the light window is of the same characteristics and performance as that usually used in the realization of covered fields, and thanks to the anti-mould and UV protection treatment, the material used does not degrade or yellow before the natural deterioration due to years of use.