The existing sports complex at the school in Staranzano is used by 600 students and, in the afternoon hours, by some sports clubs. 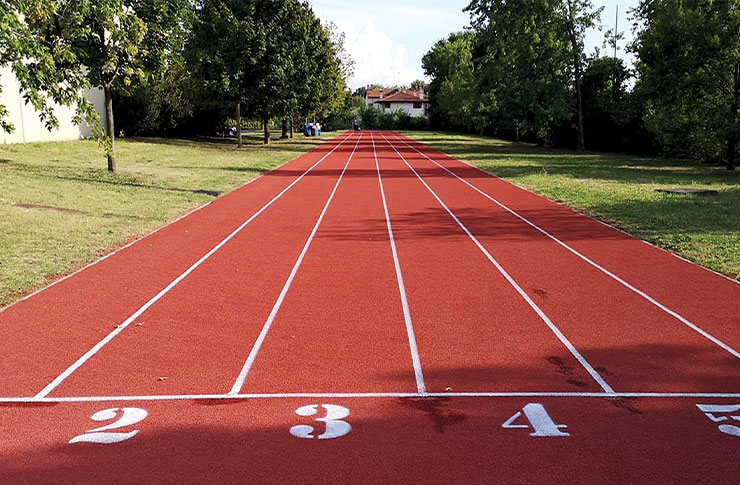 Last year the sports surface of the 120-metre track and field for athletics and the long jump track was redone.
It was not necessary to remove the pre-existing bituminous substrate, on which a new sports surface conforming to FIDAL regulations and IAAF approved, with characteristics suitable for the type of use envisaged for a facility of this kind, was laid.

The sports flooring, with a nominal thickness of 13 mm, consists of three layers.
A first support layer in prefabricated sheet with constant thickness, consisting of SBR rubber fibres and granules, mixed and joined with a polyurethane binder, glued to the bituminous substrate, for a total thickness of 10 mm.
A second surface layer carried out by skimming the prefabricated mat with two-component polyurethane skimming compound, and the subsequent application of a continuous polyurethane coating, nail-resistant, applied in the liquid state, consisting of several layers of self-levelling polyurethane.

Finally, the surface finish carried out with the manual sowing of coloured EPDM rubber granules, for which the colour red was chosen.
Currently the structure is used by the “Sport Academy”, an amateur sports association founded in 2011 thanks to Giada Gallina, former Italian record holder on 100 meters and multiple national champion, teacher and instructor, lover of the youth world. Right inow itâ€™s one of the most succesfullÂ  associations in the Gorizia provence.