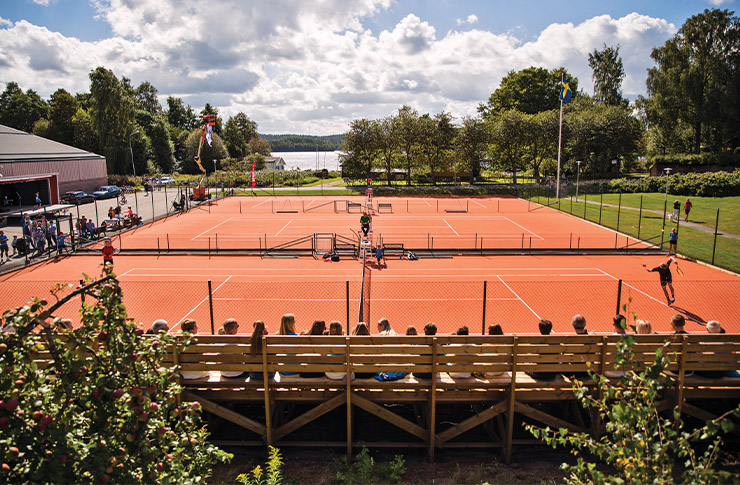 50 km from GĂ¶teborg between the woods and lakes of Sweden is located the small but proud Sandared Tennisklubb boasting an Elite Series championship with its A League team back in 2005.

Founded in 1973, today it manages a solid and prosperous activity with Junior teams and a large percentage of adults training on its courts. The club has 3 indoor courts, 1 paddle court and 3 outdoor courts beautifully located near the ViaredssjĂ¶n lake. For its 3 outdoor courts the club has decided to install Top SandÂ®.

As every year, the club organized last April the Spring Tournament Sandareds VĂĄrturnering that was played on these 3 Top SandÂ® that do not require any spring maintenance and offer great playing features. As confirmed by Paul Ciorascu, coach of the club, the Top SandÂ® courts require no preparation and allow to resume outdoor play as soon as weather conditions are favorable.

According to coach, Top SandÂ® is really a good court to play on, with all the features of a traditional court but without its drawbacks: ball bounce is intermediate, not too high but uniform throughout the court. The ball never shows bad bounces (Top SandÂ® is classified ITF class 1 slow).

Coach Ciorascu sums up : â€śa Top SandÂ® court is a very good investment that would save you a lot of time and you could start the outdoor season much sooner than on normal clayâ€ť.

The system is composed of a fiber bonded synthetic membrane glued to the sub-base (draining asphalt,  porous concrete or an old hard tennis surface with slope) and infilled with ceramic quartz sand available in red clay or green color.

Top SandÂ® courts are the alternative to traditional and/or hybrid red clay courts; its features of play are similar to red clay, but maintenance is basically reduced to use of the drag mat as needed.