Bicocca University carried out the redevelopment of the first lot of the old sport centre, including the athletics track and the football and rugby field. 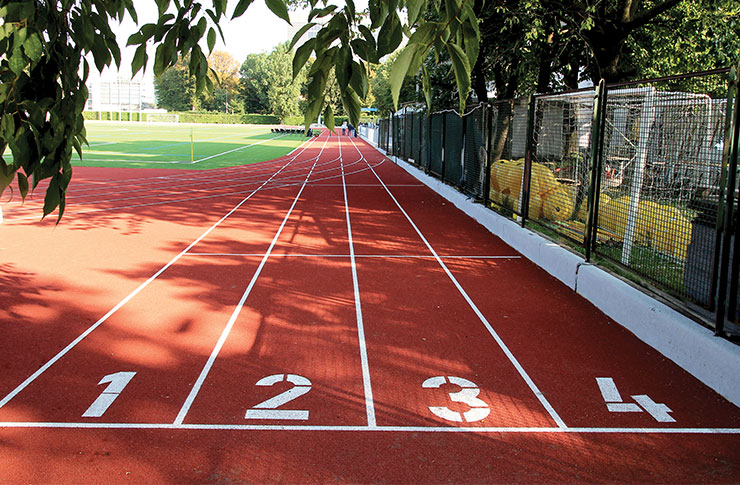 The old sports centre founded by Pirelli was reborn a hundred years later with the Bicocca University, which carried out the redevelopment of the first lot, including the athletics track equipped with magnetic sensors and the football and rugby field made of synthetic grass with an infill made from recycled ELTs.

The four-lane athletics track, made with 13 mm red pavement, cast on site, presents a technological innovation, adopted for the first time in Italy.
This is an athlete’s performance timing system, incorporated into the synthetic surface of the lanes, which through 127 invisible magnetic “doors” automatically detects data through a sensor or smartphone worn by the athlete. The system detects and stores distance, travel time, number of steps, frequency, allowing you to compare performance in different training sessions. The Bicocca track has sensors, buried in the mantle, on the 100-metre straight and on the entire ring along lanes 1 and 4.

The sports field has been designed and built in such a way as to allow a perfect dimensional balance between the soccer field and the rugby field.
The installed system, approved by FIR and IRB, is composed of a green 65 mm thick mantle of monowire artificial grass, laid on a 20 mm thick performance and draining elastic mat, obtained from a mixture of rubber granules of special granulometry bound together with polyurethane binder, laid on site.

The stabilizing infill is made of sand with controlled granulometry, while the performance infill is made of rubber granules obtained from recycled ELTs. The synthetic green covering is laid over the substrate stabilised with the specific fibre-reinforced, high-performance powder agent for sports surfaces.
The intervention was completed with the requalification of the changing rooms and the restructuring of the stands, also static, as well as the renovation of the plants.