In this centre of the Modena Apennines, a new gymnasium with related changing rooms has been built, replacing an existing small gymnasium, insufficient for competitive activities and regular training of the various sports organizations in the area. 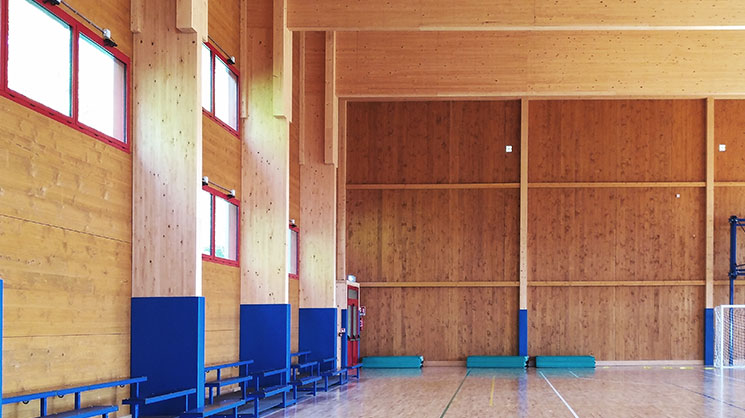 The structure of the gym, appearing to be simple despite its large size, is in fact particularly complex: a high degree of seismicity, safety parameters such that the building can be used for emergencies in the event of disasters, a high snow load, the need for a fire resistance of 60 minutes imposed by fire regulations for sports facilities, and finally the impossibility of leading the roof beams to the site in one piece, as the access road to the site is narrow, steeply sloping and with the presence of a sharp bend.

The entire building is made entirely of laminated wood, with the use of reinforced concrete for the foundations only.
The load-bearing structure of the gym is made up of wooden beams and pillars, with collaborating perimeter infills in Xlam panels, while the load-bearing framework of the changing rooms is made up only of Xlam panel walls without the aid of pillars.

The roof of the gym, also wooden, consists of a floor slab in Xlam panels fixed directly on the main beams, supporting a system of wooden trusses with a lowered arch, with overhanging mantle in curved panels of trapezoidal sheet metal.
The building has a regular external shape. The playing hall has an area of about 960 square meters with a minimum net height under the beam on the playing fields of 8 meters; the floor is made of sports parquet in dried beech. Approved for 96 spectators seated in the grandstand, it can accommodate, in accordance with CONI regulations, the game of volleyball at competitive level with a single field, or for training and education with two adjacent fields; in addition, the game of basketball and five-a-side football can also be played at competitive level.

On the north side of the gym, in a position more directly accessible from the road, are located the new changing rooms, adjacent, but structurally independent, and directly communicating with the playing hall.