Campus of CUS Parma: two tensile structures were built to replace the roofs collapsed during a snowfall in 2015. 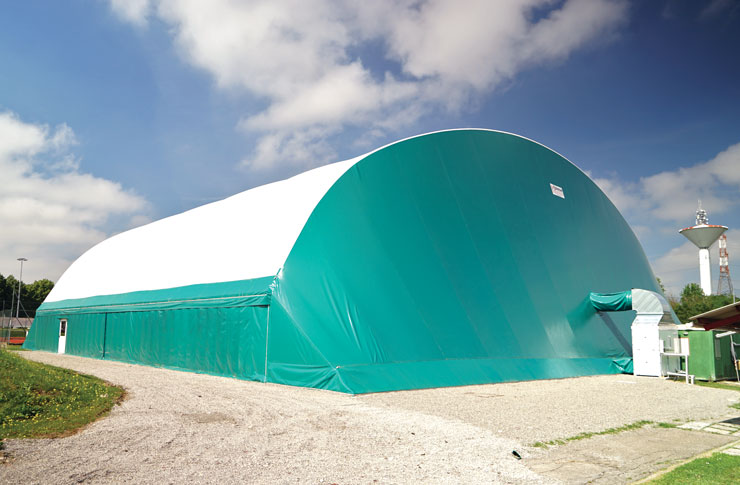 At the University’s Science and Technology Campus, managed by CUS Parma, two tensile structures have been built to replace the roofs that collapsed during a snowfall in 2015: on this occasion, the sports surfaces have been upgraded with new ones with high technical and performance characteristics.

The two new indoor facilities, of equal size, each occupy a square of 37.40 metres on each side and reach a height of approximately 12.50 metres at the top.
The structure comprises reinforced concrete foundation beams, both perimeter and transverse, and a roof consisting of six main arched beams made of glulam with transverse purlins.
The roofing of the structures is made of a PVC sheet with a double 750 g/sqm membrane with an air chamber in between to optimise energy performance.

Two different types of sports surface were chosen to replace the old, worn-out covering. For the multi-purpose facility – on which tennis, basketball and volleyball can be played – a three-layered with characteristics that ensure adequate performance whatever the sporting activity being practised.

For the structure dedicated specifically to tennis, on the other hand, a specific surface for this sport was used.
The first layer is a solvent-free, self-levelling, two-component polyurethane resin coating that acts as an elastic layer: it is used for sports floors in place of the prefabricated elastic layer. The second layer is a self-levelling fire retardant coating. The final layer is a water-based, elastic, two-component, satin-finish, low-viscosity interior sealing varnish.

During the same period in which the two new tensile structures were built, the resin surfaces of two outdoor tennis and basketball courts were also renewed. In addition, the weight room in the sports hall was completely renovated, with a modern and functional layout of the equipment and a layout that reflects that of athletic training centres around the world.