The football field managed by the amateur sports association Langa Calcio, a few months ago was revitalized with a new synthetic turf. 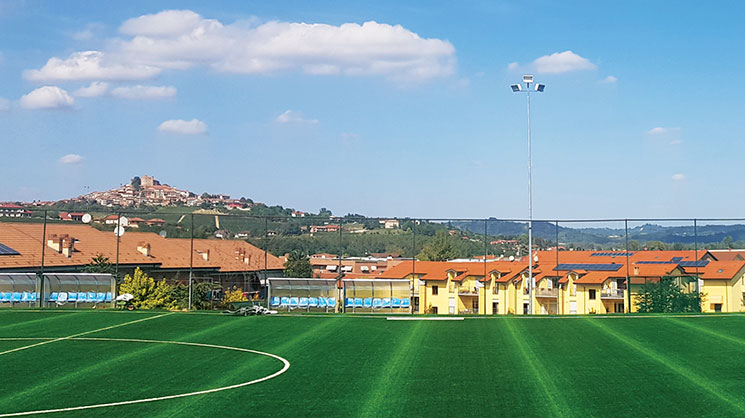 The football field has been homologated since 2010 for the first category championship. The playing field consisted of a synthetic grass pitch built in 2003, laid on a draining asphalt platform.

The pre-existing turf, even though it was kept in good working order by means of continuous “brushing” and integration of the rubber infill, after almost fifteen years of intense and completely satisfactory use, had by now lost its structural characteristics of playability and safety.
The Municipality of Grinzane Cavour, in order to satisfy a request for services from the citizens, has therefore decided to intervene on the municipal sports field by completely replacing the turf of the surface of the rectangle of play in synthetic grass, adapting it to the most recent characteristics of homologation of the National Amateur League.
In addition to the synthetic surface, the foundation and irrigation system have been redone; in addition, the goals have been replaced, new benches have been laid in accordance with FIGC standards, and one hundred seats on the stands.

The new covering is part of a system that provides a carpet composed of polyethylene fibers with a minimum length of 60 mm and a thickness of 400 microns made of extruded monofilament, anti-abrasive, resilient, extremely wear-resistant and with a special anti-UV treatment, woven with 6 monofilaments (3 light green threads and 3 dark green threads), with a final structure with a semi-concave section composed of three asymmetrical ribs. The filaments are joined to the base with the insertion on a draining support in a double layer of polypropylene/polypropylene covered with polyurethane. A special feature of this support is its excellent dimensional stability: at the end of the process described above, about 700 g/mÂ˛ of polyurethane is incorporated into the product through the finishing line. With this operation the filaments are fixed to the base, obtaining a tuft resistance to tearing between 30 and 50 N, in accordance with the requirements of the L.N.D. regulation. The performance infill on the surface is a brown/green granulate of SBR nobilized.