The English club continues to strengthen its infrastructures and, after the completion of the new training center, proposes a further expansion of Anfield Stadium. 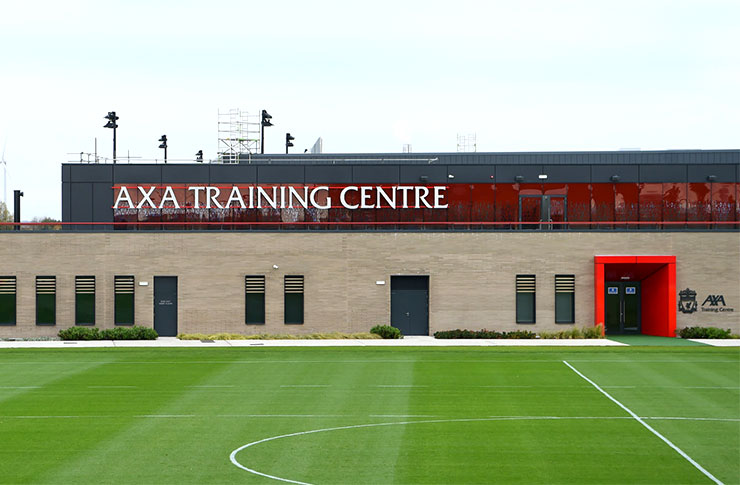 (All images are property of Liverpool F.C.)

The American group Fenway Sports, owner of Liverpool F.C. and Boston Red Sox baseball in the U.S., has already invested ÂŁ110 million for the expansion of the Main Stand in 2017; to these must be added the ÂŁ50 million that was used for the construction of the AXA Training Centre complex, and the 60 proposed for a new project to expand the Anfield Road Stand to be realized in the next three years.

Farewell to Melwood: the “Reds” move to the AXA Training Centre

Opened and officially in operation, Liverpool F.C.’s new training center is one of the most state-of-the-art in the world.
After almost 800 days of work, clearly slowed down due to the ongoing pandemic, the new AXA Training Centre is finally operational: 9200 square meters in the town of Kyrby, on the outskirts of Liverpool, for the athletic training of both the first team and the Liverpool Academy, the youth team of the English club. The need to abandon the center of Melwood came from the lack of space for expansion, which limited the possibilities of training and growth of both players and technicians.
The facility, designed by KSS Architects, includes three 11-a-side synthetic turf soccer fields, a swimming pool, padel courts, as well as various physical training facilities such as a goalkeeper training room, hydrotherapy room and hypobaric chamber. There are, among other things, offices and meeting rooms for the Company, television studios and rooms for press conferences, a locker room for the first team and one for the youth teams.

All structures are characterized by a strong and square line, in contrast with the curvilinear lines and elongated spaces of the center of Melwood, which is reinforced by the massive use of wood with natural coloring as a load-bearing element and at the same time lightened by the large windows, which allow to take advantage of natural light even in those days, not exactly sunny, typical of the British climate.
Outside the building, a “time capsule” has been installed that will be opened in 50 years’ time: inside, among other things, a letter to future fans, a program for the Liverpool-Chelsea Premier League match in July, a shirt from the 2019 Champions League final autographed by the roster and a tribute to those who lost their lives at Hillsborough have been left behind.

New plans for the expansion of Anfield Stadium: the future facility will be 61,000 people

The English stadium, home of Liverpool F.C., had already recently undergone a major expansion with work on the Main Stand in 2016-2017, which had brought the total capacity to just over 54 thousand seats. A plan had also been submitted to the 2019 public consultations for the opposite section of grandstands, known as the Anfield Road Stand, to increase its capacity by 4,800 seats. After work was halted in April, the club decided on an even more substantial intervention, at an investment of ÂŁ60 million, which sees the area of the new stands doubled with an increase of 7,000 seats. The maximum capacity of the Anfield Road Stand will then become 16,000 people.
Some concern comes from the residents of the neighborhood, who complain about a lack of attention to the road system in and out of the stadium: it is not clear, in fact, if they are already included in the project solutions to ensure the mobility of residents during events, sports or otherwise, given the potential increase in the influx of patrons.

The new project also includes a roofing structure that extends outside the stadium perimeter and joins the twin structure built on the Main Stand, with the function of protecting the area of the small external parking lot along the private road Anfield Road, which separates the stadium from Stanley Park, and for this work it will probably be necessary to close the road to transit.
The expected duration of the works is 18 months of construction, to be spread over the periods of inactivity of the stadium. The facility could then be completed in the summer of 2024.