Sustainability and versatility are the key words to describe Village Green, a new turf hybrid that makes it possible to obtain a beautiful yet easy-to-manage lawn.This innovative solution was adopted in the Municipality of Bari. 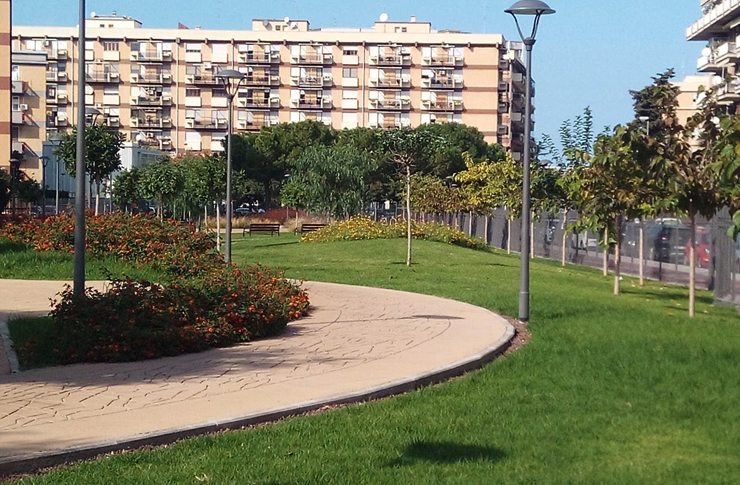 The Village Green warm season turf specie is an Australian hybrid of the kikuyu variety, Patented from the European authorities and currently produced and commercialized across all the â€śold continentâ€ť: it is currently produced and sold throughout southern Europe, receiving a great deal of positive feedback.

We currently see it being used here in the Municipality of Bari, where interesting projects for sustainable urban greenery are being realised by local producer Plantec, a pioneer in Europe in the production of Village Green. Thanks to its remarkable versatility, in fact, this species of lawn adapts perfectly to different needs.

In the Braille public park, for example, there are both active areas (with playground, dog area, high footfall) and areas with less traffic and consequent management.

At the Magneti Marelli sports field, on the other hand, the numerous players were able to see the softness and resistance to wear of the natural Village Green surface.

Mario Greco, the pitch’s maintenance manager, said: “I am positively surprised by the quality of the turf that Village Green continues to provide to the club, without any use of pesticides; it is a formidable lawn, beautiful but resistant. It’s an absolute relief to work with this species, which keeps its bright green colour almost all winter long, without having to resort to the use of pesticides in the warmer periods, as happens with other species“.

Last winter, when the municipality of Bari finished building the offices of the Puglia region, it had to complete the returfing during the coldest months, which was a risk for a warm season specie at these latitudes, but not for Village Green. In fact, despite the cold temperatures, the Australian Kikuyu held its colour well until the frosts, rooting surprisingly well.

This is confirmed by Carofiglio, the agronomist at De Grecis, an historic landscaping company in Puglia: “The work was completed during the cold months, when the C4 are brown are already but not the Village Green, which is practically green almost all year round. This allowed us to propose an aesthetically valid, sustainable and durable alternative“.