A radical intervention on a very busy facility, both in the area dedicated to ice and in the swimming pool area, which however presented functional and structural obsolescence conditions, and no longer met the operating rules. The works began in March of this year, and are expected to be completed in 14 months. 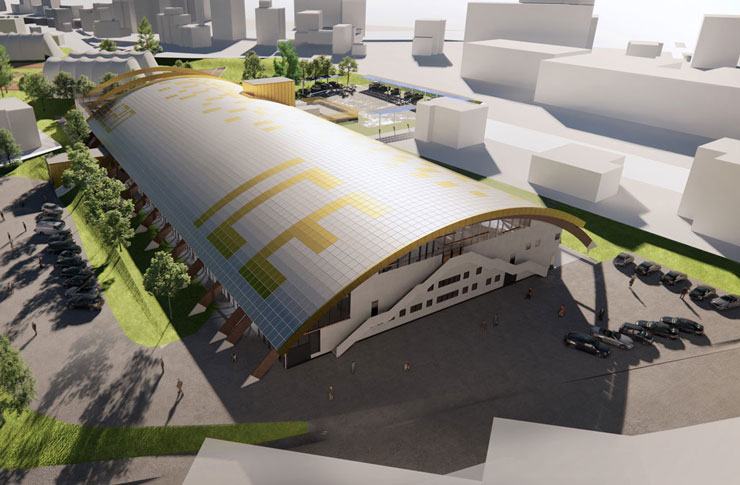 A radical intervention on a very popular facility, both in the ice area and in the swimming pool area, which was, however, functionally and structurally obsolete and no longer complied with the operating standards. Work began in March this year and is expected to be completed in 14 months.

The proposed project includes two separate interventions. One is the replacement of the entire envelope, including the removal of the roof covering, complete removal of the main and secondary structure and replacement with a new similar system of glulam with identical geometry.

The project also includes the complete replacement of all the windowed parts with new glazed facades with high energy performance and the strengthening of the opaque parts with insulation systems. This will result in a complete renovation, bringing the building up to NZEB (Nearly Zero Energy Building) standards.

The second project is the reorganisation of the interior layout, which involves extending the building towards the south, reorganising the lift systems and distribution in general, revising all the spaces open to the public and service areas, rebuilding the ice rink and rebuilding all the facilities.
The swimming pool area will be extended to the south to make room for the new, larger learning pool. A free-form pool will also be added, which will be used for introductory swimming lessons and for hydrobike and aquagym courses.

The creation of a new window overlooking the green space gives the opportunity to create mobile, vertically sliding windows, which will dematerialise the boundary between inside and outside to allow the use of the new solarium in the summer months.
The main entrance leads to the upper floors via a new staircase with two lifts, one serving the bar, located on the first level, and one serving the new fitness room, located on the second level above the swimming pool area. From the fitness room it is possible to access the terrace where two padel courts will be built.

The architectural image of the new building is characterised by some added decorative elements, rather than by a new planivolumetric image: the reuse of two glulam beams, with a non-load-bearing function, which will be positioned on the south front, at the extension, as if to indicate a virtual continuation towards the outside of the building; the extensive use of “Gold” coloured metal sheet to cover the reused beams, of several details of opaque elements, such as the parapets of the emergency stairs or the frame of the new glass window of the learning pool; the creation of glass panes with a mainly vertical motif interrupted horizontally by sunshade elements, also in “Gold” colour; the use of a metal covering with coloured panels for the roof which allows the creation of a “pixelated” shading effect and the possibility of writing texts that iconically denote the activities carried out inside.

The result is an extremely conservative intervention in its relationship with the surrounding built environment, but with innovative and captivating characterising elements without being invasive.